Skip to Main Skip to Sidebar Skip to Footer
Podcast: Inbound & Down
Podcasting 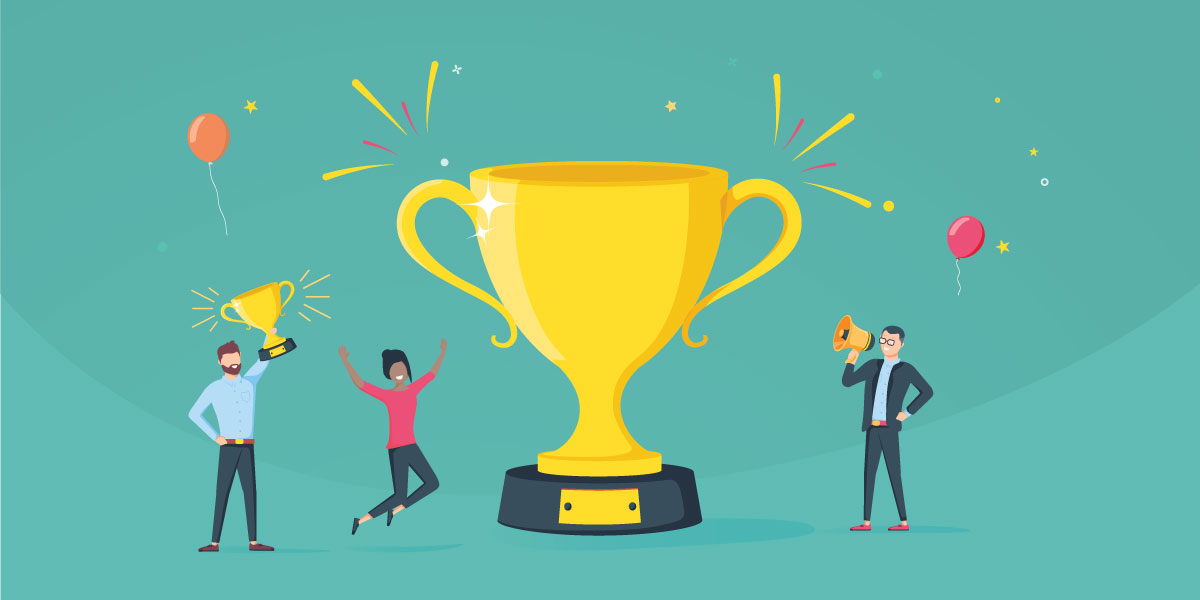 I can't lie, when I looked back and saw that our podcast only started in 2017, I was so surprised.

It feels like we've been doing this for So. Much. Longer.

Perhaps that's because we're quickly closing in on our 100th episode—and if each is a solid 20 minutes (some are shorter and others much, much longer), that's at least 2,000 minutes of episodes.

I'll go a bit deeper: If every recording session lasts about four to five hours to create about four episodes, followed by HOURS of editing out all my cackling and all of Jon's nose-whistling—I mean, math isn't my strong suit, but that's like, a lot of our crew's lives spent on Inbound & Down since 2017.

So,  yes, it feels like much longer—but longer in the best possible way.

We started this little project not really knowing what would come out of it. I was told one day that I was going to co-host a podcast and had no idea what that would entail. My colleagues and I have been pleasantly surprising ourselves, and each other, along the way.

We've laughed, though we haven't cried yet. We've learned a ton, and this current season, we've been bringing on some awesome guests who always teach us incredible things.

In celebration of International Podcast Day, we wanted to reflect on our time making this very special podcast. 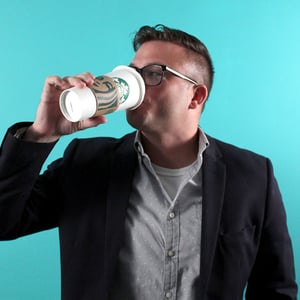 Jon Sasala has been enthusiastically adding all types of energy to each episode since the very first. He stands during every recording session because he has so much excitement on each topic that he can't sit still for too long. We actually tried once to get him to sit and timed it—he lasted all of .07 seconds.

"Hosting a podcast with my co-workers has been extremely rewarding in a few ways that I never would have predicted," says Jon. "The greatest has been as a means of better understanding. When Danielle and I discuss a topic, we both tend to approach it from very different places. I think this has allowed us to more fully comprehend issues that are important in our industry. And this transcends just the couple people in the room. Our entire team here at Morey, as subscribers, come along on these adventures in learning and growth. It has really helped us all level up in ways."

Favorite Episode? "Season 4 Episode 10 was one of my favorite episodes, 'Developing a Content Plan'" he says. "It was a great example of us offering some really behind-the-scenes advice, and a tool to help properly build a content plan. This could be valuable for both agencies like us or anyone looking to focus their content efforts. The value was confirmed by how many times the template has been downloaded, along with the positive feedback we’ve received. This episode primarily featured our incredible Danielle Esposito and special guest Melissa DellaBartolomea, who both championed the content-mapping process and accompanying template. It’s nice having people smarter than me able to take the show and run with it. We should do more episodes like this." 👂 Listen here.

"Honorary mention here, though, for our 'Coffee Talk' episode," he continues. "I can only point to this one as a favorite because of how much fun we had. Not much real learning or value other than some quality time with my I&D crew." 👂Listen here.

Favorite Podcast That's Not I&D? "I'm going with Armchair Expert with Dax Shepard," he says. "This podcast came to me highly recommended by a few people before I finally gave it a spin. This is an interview-style show, clocking in at around two hours per episode, where actor Dax Shepard is surprisingly raw and intimate with his fellow actors, directors and entertainers. His guests are the likes of Julia Louis-Dreyfus, Bill Hader, Ira Glass and Mark Duplass, to name a few. As it came to me, I highly recommend it to others."  👂Listen here.

Danielle "DT" Esposito has been co-hosting it up with Sassy since the very first episode. You might know her by the way she laughs loudly at basically everything (sorry, ears), or the way she tries to keep most things in layman's terms.

"It's crazy when I re-listen to some of those initial ones. Man, were we stiff," she laughs (to myself, since I'm interviewing myself for this piece). "I think the best thing I've gotten out of podcasting so far, though, is always being able to flex my brain-muscle by talking about things openly. We all spend a lot of time alone at a desk thinking or writing or designing, and it's nice to break up the day. When we record, we're able to share insights and brainstorm—it can really help get the creativity flowing."

"And I can't lie—I have a big, happy personality and I do enjoy being able to just let it rip in the studio. I never knew how natural 'performing' on a mic was for me, but I dig it. And I really dig seeing my co-workers shine. Everyone intimately involved with I&D has an incredible knack for the podcasting realm, whether they're a total hosting newbie like myself or a seasoned vet like Conforti."

Favorite Episode? "I'm going with a Season 2 classic called 'Mapping Your 10x Pillar Page.' Not only is Ali—our former I&D producer and my heart of the operation back then—on it, laying down some knowledge, but there are a lot of really good snippets in there about how to plan and create a pillar page. When I listened to it again I was like, 'Whoa. That's so smart!' But it's us talking! Sometimes I think we can get caught up and forget about some of the amazing knowledge we all collectively have. This episode shines some light on how to produce really good content." 👂Listen here.

Favorite Podcast That's Not I&D?  "To be honest, I was never really a podcast listener going into this. I've sort of dabbled since beginning, but any of the ones I have listened to are typically fitness-related." 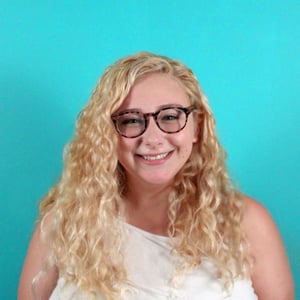 Sage Levene joined the I&D fam in the midst of Season 3, and having been an avid podcast listener for years, has brought tons of industry knowledge (and lots of beer) into our lives. Really. She comes to almost every recording session with a new batch of beer for everyone to try. It's probably because she knows we get "smarter" with each new taste test that takes place in a session.

"Working on a podcast every day is a dream come true," says Sage, who considers podcasts to be the number one source of her entertainment. In fact, listening to podcasts is literally an integral part of her daily routine.

"I listen to podcasts when I’m in the shower, getting ready, driving to work, at work, on my way home from work, cooking dinner, before bed," she explains. "Yeah, all day. They’re a very special form of entertainment to me. As a self-proclaimed introverted extrovert, I’ll experience pangs of wanting to be social, but also wanting some solitude, and podcasts fill that gap. It’s a cliché at this point, but it really is like having a conversation with some old friends, especially when listening to a podcast you’ve been a fan of for years."

Being a diehard podcast listener made her transition into producer of 'Inbound & Down' a no-brainer.

"When I applied to Morey Creative, seeing they had a podcast really drew me in," she says. "It showed me they were on the pulse of the industry, but also that they were smart, thoughtful and fun people that I could see myself working with. Recording the episodes are usually the highlights of my days."

“I love podcasts,” she adds, repeatedly.

Favorite Episode? "My favorite episode is a recent one actually, from the current season—Season 5, Episode 3: 'Why LinkedIn Ads & Inbound Marketing Are the Perfect Match, with AJ Wilcox of B2Linked.' As regular listeners of I&D may have noticed, this season we’ve made a deliberate shift to include more interviews. We still love doing our traditional host-only episodes, but there’s a special energy and value brought to the table when a specialist is given a platform to share their skill. It educates us and our listeners on topics we may not have learned about otherwise. AJ is a true thought leader and expert in his space, and brought incredible insight and candor to the table." 👂Listen here.

"Honorable mention as well to Season 5, Episode 4: 'Behind the Scenes of HubSpot Academy with Kyle Jepson,'" she says. "Kyle is such a delight, and while this episode is a little more inside-baseball—appealing to mainly HubSpot users—his sense of humor and forthrightness makes it enjoyable for all." 👂Listen here.

Favorite Podcast That's Not I&D?  "Picking is hard, but if I had to it would be Last Podcast on The Left. In true cop-out fashion, I'm going to give you a bunch of others I adore, as well." 👂Listen here. 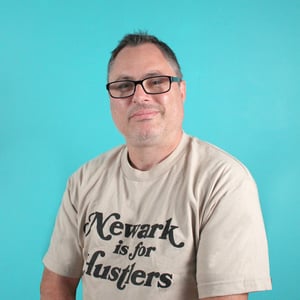 Mike Conforti aka Manny Faces, has been an engineering machine for I&D since the start. His creativity and perfectly timed sound effects have decorated each episode with his signature flavor. Not to mention, he has tons of insight, having been intimately involved in the podcasting and media space before it was "cool."

"For me, creating, producing, engineering, and editing podcasts is the most natural extension of who I am and what I do," he says. "I've been working in audio for decades, as a DJ, a home recording studio owner, a music producer and remixer, and, for several years, a podcaster. I also have a background in journalism. Podcasting—whether it's a serious journalistic endeavor, a branded podcast, or a homegrown podcast like Inbound & Down—is a medium where storytelling, messaging, humor, insight, and inspiration can all come together in a truly compelling, engaging piece of media, and I enjoy this work immensely."

Favorite Episode? "This is a cop-out, I know, but I don’t have a favorite episode," he confesses. "As someone who spends a little less time in the matrix of inbound marketing and HubSpot, I not only get to engineer and edit these episodes, but I learn new things every time. For the rest of the crew, I’m sure they feel like they might just be preaching to the choir, but I can testify that to an outsider, maybe a company just dipping their toe into the inbound world, or another agency trying to work out some kinks, Inbound & Down is the perfect example of podcasting edutainment."

Favorite Podcast That's Not I&D?  "Here I’m a bit biased," says Mike. "We have a few podcasts under the MCS banner, one of which is News Beat. It’s part social justice journalism podcast, part audio documentary, part music soundtrack. Think of it as if 60 Minutes and 'Hamilton' had a podcast baby. We’ve won several major journalism awards, but most importantly, do a compelling job of shedding much-deserved light on some of the injustices that all-too-often go underreported or misunderstood by the general public. It’s important work, and it happens to sound pretty amazing. 👂Listen here.


To see the crew in action, check out all episodes of 'Inbound & Down.' 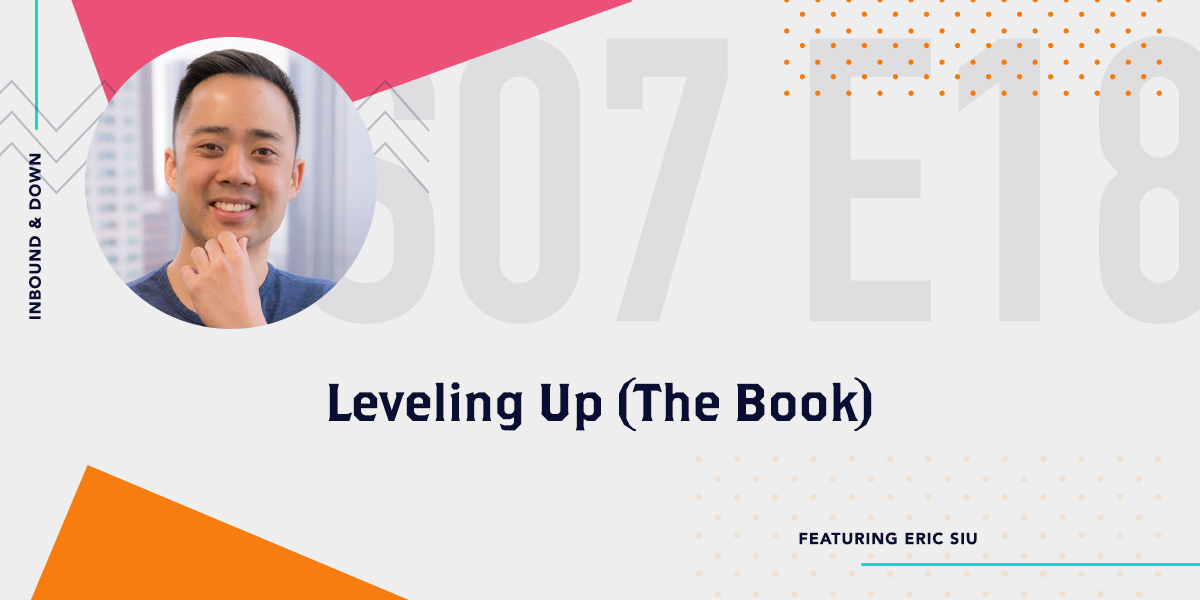 [Podcast] 'Inbound & Down' S07 E18: Leveling Up (The Book) ft. Eric Siu
On this episode of 'Inbound & Down,' host Jon Sasala chats with Eric Siu, CEO at ClickFlow and author of "Leveling Up: How to Master the Game of Life." Read More 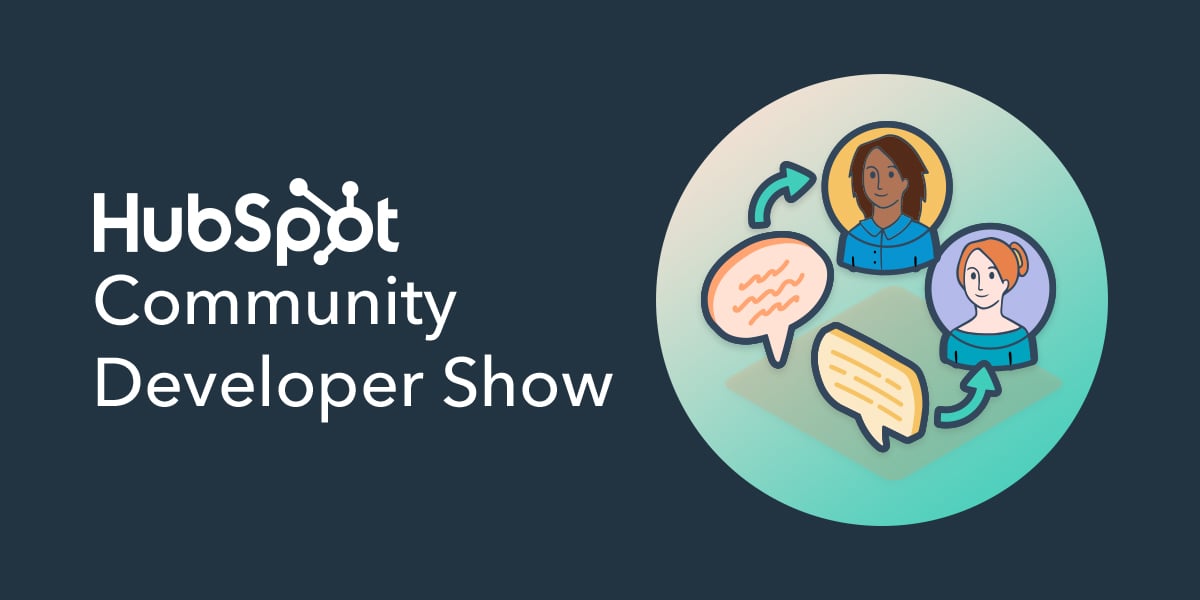